Political Ads, Propaganda, Comic Relief, and Your Right to Vote

[lead]As I sit here, I’m able to hear the sounds of commercials from my living room television. Do you know what I can clearly hear? A commercial for a political ad. Ugh.[/lead]

Bash bash bash, can you believe he did/said THIS? Vote against so-and-so.

….Ugh. There’s another one.

In fact, during the 2 minute commercial break, I picked up 3 political ads followed by a commercial for a new episode of a show, a teaser for the current show playing, and then guess what? If you said a fast-food commercial, you’re wrong. BECAUSE IT WAS ANOTHER POLITICAL ADVERTISEMENT. (For validity of this paragraph, I actually went and rewound the TV to make sure I was sharing the correct facts. If you don’t believe me, visit my FACT CHECKER at: karyannissickofbeingbombardedbypolitics.com.)

Throwback to a few minutes earlier today when I checked my mail.

What did I get? A bill. A late Halloween card for the kid. Then not one, not two, not three, but FOUR political mail pieces. (Sidenote: I have some FANTASTIC fire-starter pieces for sale! Hit me up if you want a stack.)

…Hold on, I just got an alert on my iPhone that someone posted on Facebook. I need to check it. 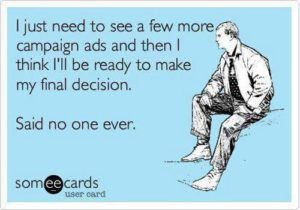 Look, I get it. I was a Communications major with a Media Production emphasis at Flagler College. From television and radio to the internet and print, the media helps spread and disseminate information. Getting one’s message across wouldn’t work half as well if the media didn’t exist.

….and all that other stuff I learned with my private school education.

Let me just stop with the humorous rant for a sec and point out that I am a 100% true believer in the power of marketing and advertising. Advertising happened to be my minor at Flagler. And why would I work at a digital marketing agency like Walk West (formerly Greenroom Communications) if I wasn’t?

It’s true. We’ve successfully helped with the campaigns of two different political figures. From media training to social media campaigns to helping with ideas for creative video, we’ve done it all to help run meaningful campaigns that successfully get the story across.

And the work we did for Wake County, NC Commissioner John Burns: #4pizzas: Giving Wake County teachers the raises they deserve

The point of this whole blog rant is, when has the bombardment gone TOO FAR?

Just imagine the good we could do if that money was spent on, oh, I don’t know. Helping the homeless of our country, improving our schools…

Did you know in some other countries the use of broadcast media to circulate political messaging is restricted? In the European Union (EU), many countries forbid paid-for TV or radio advertising for fear wealthy groups will gain control of airtime. In Ireland and the United Kingdom, though political party broadcasts are allowed in a small number of runs up to election time (we’re talking like, a few weeks before the election), paid advertisements are prohibited.

However, the United States has a free market for broadcast political ad messaging. Geesh, thanks Buckley v. Valeo. If you’re not familiar with that case, it was a 1976 ruling about money in political speech, which allowed unlimited funds to be spent on a campaign. It was ruled that setting limits on campaign spending was unconstitutional, because it violated the First Amendment provision on freedom of speech. Spending money was viewed the same as written or verbal expression.

Now, I could get into a major debate about campaign-backing individuals vs. corporations, and how corporations aren’t people and therefore shouldn’t deserve the same free speech rights. However, that would open up to door to someone like Ilya Shapiro, Senior Editor of the CATO Supreme Court Review, who would argue, “Since, corporations ultimately are a collection of individuals, the money pooled together from their assortment of resources is dedicated to advocate the causes of the business and the people the business represents.”

So instead of opening up that can of worms, I am just going to direct you to this great post by Vitaliy Perekhov, a political writer for BillTrack50.com, who said it best:

Nevertheless, the constant bombardment of either negative or nauseatingly positive ads provided for by money from undisclosed sources can safely be considered as contributing to what amounts as a toxic discussion of current political discussion.

If you get the chance to read the entire post, it’s quite good.

Phew! That was quite stuffy. Let’s all take a break now and watch this YouTube gold.

If you didn’t let out at least a smile, then you’re too serious and need to lighten up. I mean, really. It’s only politics.

The take away from what my husband called “musings of the crazy pregnant lady” is this:

Use the advertisements in media to spark your curiosity, but don’t be blinded by all the media fog. Do your own research on candidates, form your own opinion, and if nothing else, don’t forget to own your given right to VOTE!

Still not sure who to vote for? There are plenty of non-biased sites you can visit that will help determine who you side with the most. Just answer a few questions about your stance on different popular political issues. My personal favorite is ISideWith.com, but there are other options as well:

For an interactive experience: http://votesmart.org/voteeasy/

For more of a simplistic approach: http://www.votehelp.org/

For another option in deciding: http://www.votecompass.com/

We’re only one week away until official election day. Happy voting! And if you can go to an early voting place, I recommend that, too. Unless, of course, you like standing in line like you’re at Disney World just to cast your ballot on November 8th. 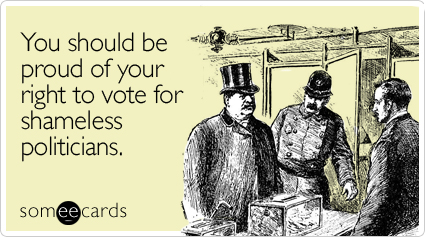