Author: Walk West
[lead]Just don’t let me bomb. I hope they laugh at my jokes. Please don’t let them see how nervous I am.[/lead]
These are common and reasonable concerns when you’re giving a presentation. Even experienced speakers can get the jitters. And even experienced public speakers sometimes tell an opening joke that is met with silence!  So how can you recover from and preferably avoid the dreaded lame joke? 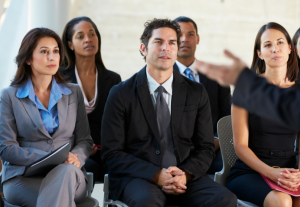 
So you’ve practiced this joke and you think it’s hilarious but your audience is not impressed. You can just keep going like you never told the joke…or be ready with a comeback, like, “my dog loved that joke,” or “you’re going to crack up later when you get the punchline.”

Don’t rush through it. Let the audience get the joke. Not everyone laughs out loud and that’s ok.


If you’re speaking to a group of doctors, you may not want to tell a joke at the expense of the medical industry. That may not go over well.

Instead, it’s always safe to joke about yourself. A little self-deprecation can be a perfect way to warm up the crowd. And you can do this without undermining your expertise.

For example: “I came home last night to tell my wife about this amazing research our lab is working on. Honestly, I was feeling pretty impressed with myself. After going into great detail, she smiled and said, ‘That’s great dear, now take out the trash.”

You’ve acknowledged that you’re a great researcher, but still human and you don’t take yourself too seriously…and neither does your wife.

If the audience looks bored, you can even say, “After my speech, I’ll be sure to wake you up so you can ask questions.”

No matter what the joke is…sell it! 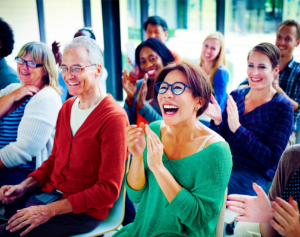 
Here’s a perfect of example of misjudging your audience by yours truly.

I was giving a media training with my Walk West, (formerly Greenroom), partner Sharon Delaney a few weeks ago. I was explaining that if public speaking makes you nervous, perhaps you should create a confident alter-ego. The bold, self-assured side of you!

I was speaking to a group of middle-aged white gentlemen who were fully following me until I said, “You know, like Beyonce’s confident alter-ego Sasha Fierce.”

You could have heard a pin drop. Wrong audience!

Now fast-forward 2 weeks. Sharon and I were doing a public speaking training with a 30-something white woman who is rapidly climbing in the real estate market in Wilmington, NC. I thought, why not try the same analogy and if it bombs I will never use it again. She immediately said, “Oh yeah, when you mentioned alter-egos I thought of Beyonce’s Sasha Fierce.”


Don’t expect full blown belly-laughter with your jokes. The open lines are just to show you are a person. You want the audience to relate to you, especially if you are speaking on a subject on which you’re an expert. The jokes or opening stories are just a brief introduction to show…you’re human. 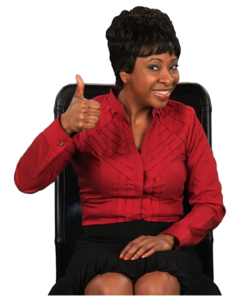 This may be one of the most important tips!

Bring along friendlies. They can be family members, friends, and/or co-workers. Plant them around the room and remind them to nod, smile, and laugh at all your jokes. If they are laughing, those around them may laugh, too. During your speech, you can also focus on your friendlies…because they have your back!

Finally, relax! When you are comfortable up on stage, you put your audience at ease as well. They have shown up to hear you speak and they don’t know if you make a mistake unless you tell them.