What GoGo Squeez Can Teach Us About Social Media Crisis Management

[lead]I once helped manage social media for a company who had an issue with customers’ accounts being hacked.  About a year after experiencing a terrible breach, they suspected customer information was compromised again.  The company decided to quietly make all customers reset their password over a weekend without explanation, hoping no one would compare notes with each other.[/lead]
What started off as a well-intentioned solution to proactively keep customers’ accounts safe, quickly turned into a major crisis.  Customers began discussing the widespread password change and feared their information had been hacked again.  The company tried to get in front of the chatter with a blanket statement; however, their lack of details only fueled more backlash.  Eventually, people moved on from the issue but the unsecured account stigma was one the company continually battled. This story is an example of improper crisis management.

Now enter GoGo Squeez. If you’re a parent of a toddler like I am, you probably know about GoGo Squeez’s most recent voluntary recall.  Much like the brand I mentioned above, this is not the first time the product has been recalled and parents/kids are up in arms about it.  Back in October, GoGo Squeez discovered mold in their applesauce pouch products.  To be fair, during that crisis they acted less than favorably and did not follow best practices in every instance. No more than five months later, they are currently recalling the same product, due to residue in their machines that did not meet their quality standards.  Two recalls so close together is not an ideal situation, but they are handling it all with poise and humility.  It appears they have learned from their prior mistakes and have become a shining, positive example.

There are a number of ways (outlined below) to properly handle a brand crisis in social media.  However, the biggest takeaway is one we specialize in here at Walk West, (formerly Greenroom Communications):

Here is what we can learn from GoGo Squeez this time around.

1. It’s All About Transparency & Sincerity. A personalized, lengthy message (much more than what was provided in the PR release) was posted to Facebook by the Founder & CEO, Michel Larroche, informing the community of the situation early on March 5th.  Details about how the recall came to be and what steps were being taken were very extensive.  The note was heartfelt and apologetic, not cold and impersonal.  In taking this approach, GoGo Squeez recognized that people who opted-in to their brand through social media were most likely their best customers and they treated them as such.  Even in subsequent posts, the brand went into details about where the residue was found and which facility the recall was coming from.  These are details most brands wouldn’t dare share with the public.  When dealing with a crisis, the depth of transparency you provide as a brand can make or break your ability to rebuild your customer’s trust. 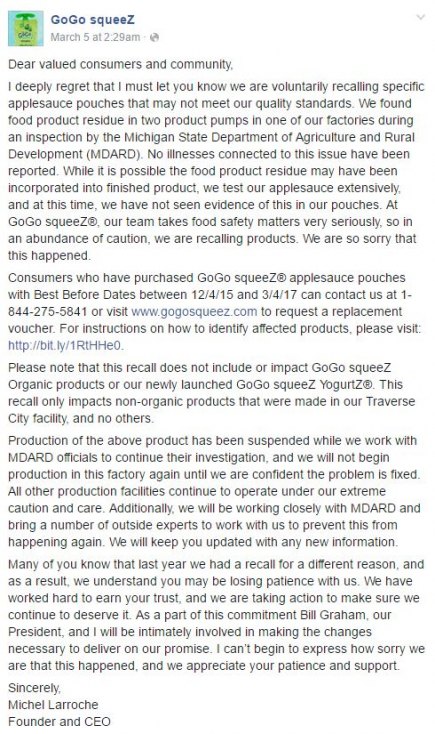 2. Think Outside Of The Can. Canned responses in social media are a personal pet peeve of mine.  Don’t see the issue with them?  Think about it this way: When you get a cold call over the phone, you can tell within the first few seconds if the person you are speaking with is genuinely trying to win your business or reading from a script.  It’s the same with social media.  It takes two seconds to scan the comments section and see all those canned responses copy and pasted to everyone.  What’s the point in responding to someone if you don’t care enough to truly talk with them?  GoGo Squeez threw canned responses out the window and personalized each reply.  They repeated themselves when needed (re-explaining the situation or how to tell if your product was part of the recall) but their posts never came across as canned.

3. Respond To Everyone. Taking a page out of Jay Baer’s Book, Hug Your Haters, GoGo Squeez responded to every question, comment, concern, or just plain venting, publicly on their page (for the most part).  This is a key aspect of properly handling a social media crisis, because even those who don’t comment are watching carefully to see how you handle yourself.  Especially with the most disgruntled customer.  You must respond to everyone to show you are listening and you care.  Baer believes in only responding twice to anyone to keep from falling into a vortex where you could suddenly come across as being defensive or allowing a customer to offer up their life story.  If you do sense the vortex pulling you in, see point #4.

4. Go Offline. Sometimes you need to take your customer conversation offline.  In GoGo Squeez’s case, parents discussing a child’s sudden serious illness or someone not able to access the voucher form, caused the brand to suggest a phone number or email address to speak directly with their Customer Care team.  These are perfectly appropriate cases to offer up more help outside of a public forum.  It also put the ball in the customer’s court if they feel passionately enough to take you up on it.

5. Hurry Up and Wait. There are several areas where timing is important when dealing with a client crisis.  First, act as quickly as possible to get ahead of the conversation.  You want to be in control of how your message goes out.  It’s an uphill battle to combat a negative collective bias if you don’t move fast enough.  Second, respond to all of your customers as quickly as possible to show you care.  I personally reached out to GoGo Squeez to confirm whether or not my product was included in the recall, and got a response in just 7 minutes.  Lastly, you need time to let the situation breathe.  It’s been almost a month since GoGo Squeez has made any sort of Facebook posts after their recall announcement.  Jumping right back into your regularly scheduled content after a crisis can come across as callous and out of touch.  GoGo Squeez is smart to wait until the conversation dies down before going back to their light-hearted, fun demeanor.  For other brand personalities who are more serious, this wait period may be less. 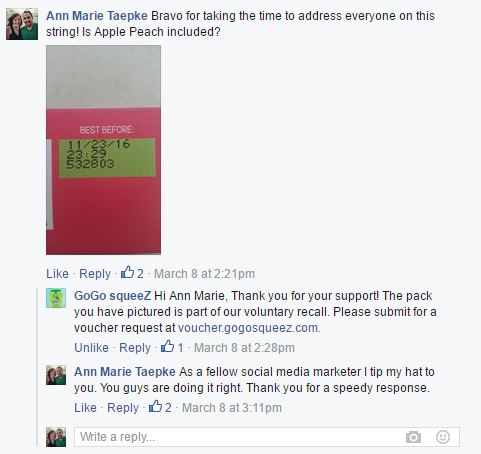 If you’re still reading, you’re probably thirsty for more. Learn how to set up a social media war room to handle a brand crisis or to speak with us directly by reaching out.